In the recent issue of Moscow Defense Brief magazine the article by Alexey Ramm "The Russian Military Police" was published. Bmpd presents its contents.

he Military Police is the youngest branch of the Russian Armed Forces. Its main role is to maintain order and military discipline in the forces. MP servicemen are also involved in humanitarian operations in warzones, and in the prevention of any unlawful conduct against civilians In the armed forces of other countries, military police outfits have existed for decades. They are regarded as a key instrument of maintaining discipline and order, not only in military units but also across territories controlled by the military. 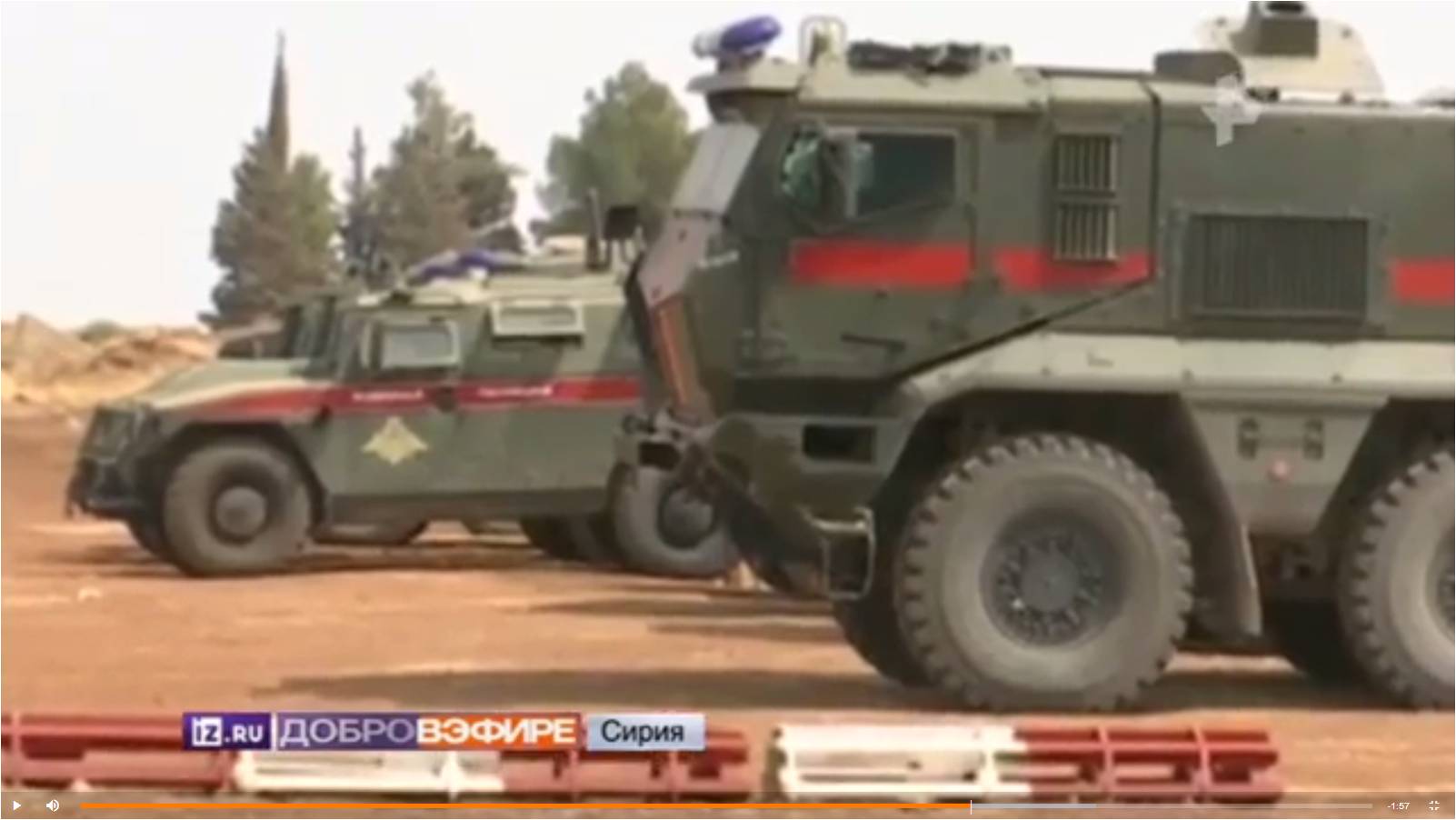 But the Soviet army never had a military police service; until recently, the same was true of the Russian armed forces. Instead of military police, there was a complex system consisting of the military prosecution service (and the military investigations committee, set up in 2007), military counterintelligence, military commandant offices, and even military traffic cops.

The Russian military-political leadership was opposed to the very concept of military police as an instrument of law and order. Only in the mid-1990s and the early 2000s did it begin to warm to the idea. Establishing the Russian military police was a very difficult process that took nine years to come to fruition. Decisions were made, then reversed; the new outfit’s remit was revised on several occasions. It was not until 2015 that President Vladimir Putin finally approved the Military Police Statute.
Nevertheless, the new outfit’s organizational structure is not yet settled; there has been a series of small tweaks, and a major change in legal status may be on the horizon.
Complex structure

The formation of the Soviet/Russian system of upholding law and order at military units and in the territories controlled by military administrations began in the 1930s. The system then remained unchanged for over 70 years, until 2009.

At its core were military commandant offices, which were set up at every garrison. Garrisons are essentially a system of military administrative division; the boundaries of each garrison do not match the civilian administrative borders of the Russian provinces. For example, a large city may be divided into several garrisons, but a single garrison may be responsible for the territory of several provinces.

Take, for example, the Yurga garrison of the Central Military District. The commandant office of that garrison is in the town of Yurga, in Kemerovo Region. The garrison itself is responsible for several districts of Novosibirsk Region and Kemerovo Region.

It is worth noting that the boundaries of each garrison and the location of each commandant office are decided by the minister of defense, who issues special resolutions to that effect.

The commandant office is responsible for maintaining order and discipline in the territory of its garrison. To that end, it operates special patrols that monitor the observance of the uniform code and military statutes by servicemen, and make sure that they abide by public order regulations. The commandant office also controls the military road police, who have more or less the same remit as regular traffic cops, but with respect to army vehicles and drivers.

Notably, the commandant offices had neither the personnel nor the hardware of their own to perform these roles; both were contributed by the military units stationed in the respective garrison’s territory.

Crimes and lesser offences committed by military servicemen are dealt with by the military investigations departments and the military prosecution service. Military detectives and prosecutors are not subordinated to the MoD; they currently answer to the Investigations Committee and the Chief Prosecutor’s Office of the Russian Federation. In the Soviet period, they worked for the Main Military Prosecution Service.

This complex separation of powers was designed to prevent any single agency from taking over the entire law-enforcement remit. This was supposed to prevent any cover-ups and facilitate better control and supervision. The same system was operated in the event of war. The Soviet/Russian command would set up garrisons, commandant offices, military investigation departments and prosecution offices in the territories controlled by Soviet/Russian forces. Apart from keeping the military personnel in check, they were tasked with providing security on military roads, protecting military bases and communications from saboteurs, and maintaining law and order among civilians.
The need for military police

After the break-up of the Soviet Union, numerous problems arose with law and order at military units, including widespread bullying and violence against civilians. It turned out that garrison patrols were often unable to restore order. There were simply not enough of them, and they were made less effective by having to rely for their personnel and hardware on the very military units they were supposed to supervise.

Also, commanders of military units and chiefs of the military commandant offices lacked the authority to bring servicemen to account for criminal offenses. In fact, many officers, warrant officers, and sergeants would sometimes cover up crimes and lesser offences committed by their subordinates in order to protect their own careers.

The situation was kept under control through the effort of military investigators and prosecutors, whose bosses had adopted a tougher stance and urged them to bring more criminal charges against military offenders. Things began to improve in the late 1990s, and during the second campaign in Chechnya cases of violence against civilians were few and far between. The number of other offences was also reasonably low.

But, despite the improvements in law and order and military discipline, the fighting in Chechnya revealed that the commandant offices were undermanned and underequipped to function effectively in a warzone. That is why in 2001-2002 the commandant offices in Chechnya were given special new units tasked with patrol duty, guarding the roads, and protecting civilians and military facilities. Nevertheless, the training and equipment of their personnel were often inadequate to the task at hand.

In 2006, President Vladimir Putin initiated the establishment of the military police service. The new outfit was supposed to take over the military commandant offices, and the offices themselves were to be given new, specially trained and equipped units. Depending on the size of the garrison, the MP units could be as small as a platoon, or as large as a battalion.

In peacetime, these units were to perform patrol duty and maintain order and discipline among military servicemen. Their remit also included dealing with AWOL cases. In wartime, they would protect military facilities, road infrastructure, and civilians, as well as man checkpoints. The initial plan also included the Military Police taking over some of the remit of the Military Investigations Committee. Military policemen were to be given the power to launch investigations under some articles of the Penal Code, and even to bring criminal charges. To that end, every commandant office would set up an inquest section.
The go-ahead

In 2009, the then defense minister, Anatoliy Serdyukov, announced the launch of the Military Police program; the outfit was expected to become operational in two years’ time. The MoD set up a special working group chaired by Col. Gen. Sergey Surovikin, an experienced military administrator.

The first military police units and inquest sections were set up at some military garrisons later that year. The commandant offices and their officers were given special status. The Military Police service was also given a unique military unit, the 130th Independent Motor Rifle Brigade (Military Police). Stationed in Moscow, the brigade included several rifle battalions armed with armored vehicles and APCs. It also had its own Spetsnaz unit, snipers, and even a psy-ops squad. The brigade began to be formed in 2011.

Similar units were supposed to be set up at every military district. The 346th Brigade, manned and equipped to the same standards, began to be formed at the Southern Military District shortly afterwards. The unit was initially stationed in Kubinka, Moscow Region, and was later to be redeployed to the Caucasus. Both of the new brigades included many former commandos.

But in 2011 the Military Police program was cancelled, and the existing military police units assigned to the commandant offices disbanded. After defense minister Anatoliy Serdyukov lost his job in 2012, the 130th Independent Motor Rifle Brigade was also disbanded, while the 346th Brigade was turned into a Spetsnaz unit and relocated to Prokhladny.

The reason for that U-turn remains unclear. According to some reports, the MoD ran into stiff opposition from the Investigations Committee and the prosecution service because minister Serdyukov was apparently planning gradually to expand the remit of the inquest section, which were supposed eventually to take over completely from the military investigations departments. The new defense minister, Sergey Shoygu, adopted a more cautious stance on the military police proposal. The inter-agency process to finalize the MP structure and remit took until 2015. The old working group on the establishment of the Military Police service was replaced with the Main Military Police Directorate at the MoD.

The new structure of MP units is less ambitious than the one planned by Anatoliy Serdyukov. Each military district now has a military police directorate. As before, a new military police unit (ranging in size from a platoon to a battalion) will be set up at each garrison. In addition to standard-issue small arms, military policemen will be armed with non-lethal weapons, such as truncheons and riot gear. They will be equipped with Tigr and Typhoon-K armored cars, as well as KAMAZ trucks carrying armored pods. MP units have also begun to receive Rys armored cars (the locally made version of IVECO’s Lynx model).

The idea of setting up MP brigades has been abandoned. The inquest bodies have been downsized, and their remit is limited to reporting any crimes or minor offences to the military prosecution service. Nevertheless, according to the latest reports, the MoD is in discussions with the Investigations Committee about the possibility of authorizing military policemen to investigate offences under some individual articles of the Penal Code. The total number of the military inquest officers will be limited to only 200.

Several military police battalions have been deployed specially for the operation in Syria using the personnel and assets of the Vostok and Zapad special forces battalions and Spetsnaz units of the 19th and 161st Motor Rifle Brigades. These units are now used in humanitarian roles in Syria.

There are also several combined military police units at the Khmeimim airbase and the Tartus naval base. They are tasked with guarding the perimeter of these facilities and protecting depots, aircraft hangars, and ships at port. Their servicemen also escort cargo convoys.